In an age of constant distraction, getAbstract’s readers are deeply interested in tackling time management and establishing deeper relationships. That’s the obvious conclusion from the site’s 10 most popular downloads in 2017.

getAbstract produced thousands of summaries in 2017. The most popular by far was Deep Work, a book that urges workers to silence the smartphone, ignore the email and do some real work. It wasn’t the only popular title on that theme to crack the top 10. The 15 Secrets Successful People Know About Time Management ranked seventh, while Reclaiming Conversation: The Power of Talk in a Digital Age placed 10th.

In this 2016 guide to tuning out distractions, Georgetown University computer scientist Cal Newport offers advice for coping with a world dominated by interruptions from emails, Facebook updates and text messages. Responding to distracting makes you feel busy, but it’s really “shallow work,” he argues. “Deep work is necessary to wring every last drop of value out of your current intellectual capacity,” Newport writes.

The age of big data is here to stay, and Cole Nussbaumer Knaflic serves up suggestions for communicating with numbers and using data visualization tools. Intriguingly, telling stories with data isn’t so different from telling stories with words. Figure out what your audience is interested in, then provide it in an uncluttered, straightforward way, she advises. “Being able to tell stories with data is a skill that’s becoming ever more important in our world of increasing data and desire for data-driven decision making,” Nussbaumer Knaflic writes.

3. The 7 Habits of Highly Effective People 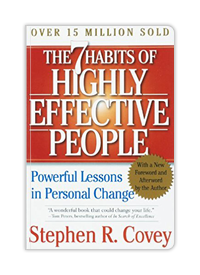 This enduring classic was first published in 1989. While the two most popular downloads are very much a product of their tech-centered times, The 7 Habits is timeless. Author Stephen Covey, who died in 2012, offers common-sense but powerful tidbits such as “Be proactive” and “Begin with the end in mind.”

Other popular downloads for the year: Thinking, Fast and Slow; The Coaching Habit; Winning Arguments; The 15 Secrets Successful People Know About Time Management; 70:20:10; The Five Thieves of Happiness; and Reclaiming Conversation.

Misconceptions about motivation abound. Let’s take them on.

The mechanisms of internal talent development and recognition are as diverse and varied as their demonstrable effects. What really works? And which “strategies” are a case for the storybook?